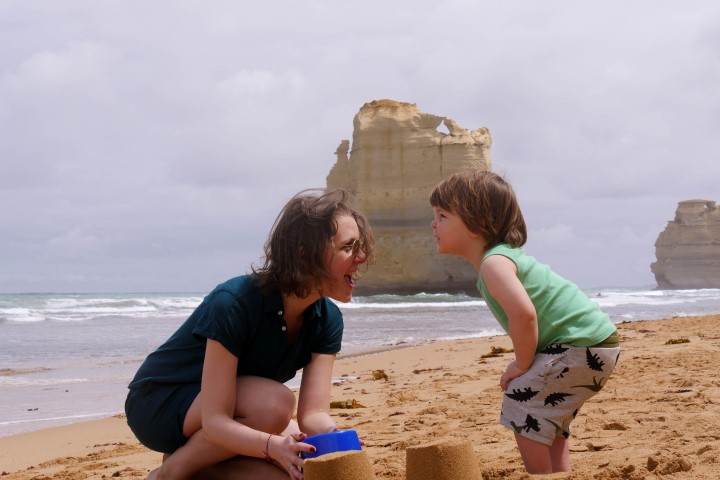 I really miss the day we spent in Port Campbell National Park and I somehow regret we did not stay longer there, but that is what happens when you want to taste a bit of everything.

After a self-prepared delicious breakfast, we drove towards Port Campbell National Park. I had already seen numerous pictures of this area as it is one of the Australian highlights, and I was really looking forward to it. According to many, the best time to visit the 12 Apostles is either early morning or later in the afternoon to avoid the crowds and to see a breath-taking sunrise or sunset.  Unfortunately, we missed the sunrise. However, the location definitely did not disappoint! If you are planning to go there, make sure you bring appropriate clothes as the weather is constantly changing. We really had faith in the morning sunshine, so we only had warmer clothes for our son and not for ourselves. When we got to the viewing point of the Twelve Apostles, the temperature dropped 12 degrees and we froze in our summer outfits.

Port Campbell National Park is known for its extraordinary collection of sculpted rock formations and the famous Twelve Apostles. The main points of interest (Gibson Stairs, Twelve Apostles, The Arch, London Bridge and the Grotto) are located a few kilometers apart.

Seeing several small parking lots on the way to Twelve Apostles already being full, we drove directly to the Twelve Apostles Visitor Centre where we could park the car. Once there, we had two options. We could either walk to the Gibson Steps (officially a half an hour walk) or drive there (a two minute drive, with a risk that the parking lot would be full). Full of enthusiasm and energy we decided to walk and it took us about one and a half hours. Our sweet little toddler brought his bucket and shovel (the best 4 dollars we spent on the entire trip) and kept filling and emptying this with pebbles all the way insisting to carry the increasingly heavy bucket himself.  Needless to say, we were moving ahead with the speed of a snail (if it was a race, I would have put my money on the snail!), but it did not matter. The weather was great, my husband got to test out the action camera and I was so excited about finally seeing the Twelve Apostles that nothing mattered anymore! At that point, we were convinced that he might fall asleep once we got to the Gibson Stairs and the beach. By the way, this walk is easy to do with a stroller as well. The only issue would be the stairs where you would need to carry it.

Once we got to the beach, the fun continued. To me this beach felt surreal. With hardly any people there, a mix of sunshine with a bit of haze, the colour of the sand, the sound of the water and the rock formations surrounding us, it was just unbelievably beautiful.  We made sand castles, ran around, relaxed on the beach while our toddler continued playing. We probably stayed way too much here and spent too much time on the way here given the fact that we only had a day, but it was a lot of fun and we were all enjoying it and that mattered the most.

After a long time, we left the beach and headed back to the Twelve Apostles Visitor Centre. This way back took even longer, as it seemed nearly impossible to get our toddler to move in the right direction. After a while, we seemingly passed the invisible ‘point of no return’ whereby the only logical approach is to move forward. My husband walked all the way ahead to our car to get the stroller, while our lovely toddler was playing with pebbles, outpaced by even the slowest snails. Once we finally arrived at the Visitor Centre and had a small bite, we went on to the the main point of interest: the Twelve Apostles rock formation. As mentioned above,the temperature dropped significantly, it was very windy and it started raining a bit. The viewing point is very beautiful but it was extremely crowded and given the weather and the fact that we froze we just stayed a few minutes and left. After a lot of play and fun, our son fell asleep in the car so we took turns to shortly visit the London Bridge and the Grotto, which were a lot less crowded but still amazing.

On the way back, on the way to the Cape Otway Lighthouse, we were hoping to spot some koalas. This was based mostly on the observation that there were a few koalas drawn next to the road on the tourist map. However, that rainy afternoon we were apparently just unlucky. There are supposed to be many koalas in the trees there normally.  We did see a few kangaroos though. Some on the middle of the road (good thing we didn’t drive in the dark) and some in the adjacent fields.

It’s now been almost one and half months since our fabulous trip and looking back it feels like the days were so perfectly connected, that (almost) everything went so smoothly. I really miss the precious time we had together and I am convinced that traveling together is one of the best investment in ourselves.