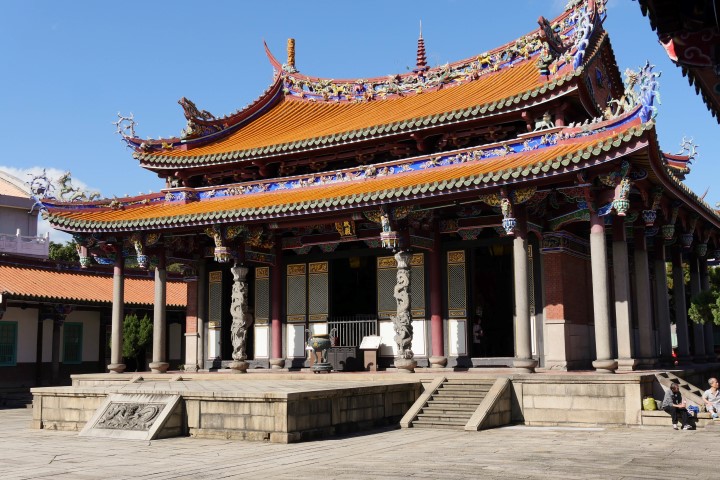 We learnt by now that Taipei is quite a chaotic and busy city with an abundance of anonymous looking grey buildings and an equally gray smoggy air. Despite this, somehow  most of the time felt as though if I was in the middle of a treasure hunt. In between the greyness, lovely unexpectedly creative places would appear in our way. I can say that in Taiwan I have seen the most creative shops, restaurants, buildings, street art and the kindest people!! This is one of the places where if you go with your eyes and heart wide open, it will not stop surprising you!!

During our two weeks we experienced almost all the seasons (which made packing tricky). On the first day we were still wearing our winter jackets, while on the second day there was a perfect sunny day almost suitable for T-shirts. The initial plan was to see a few temples and the Daan park. A toddler will always ensure the element of surprise in a trip. He consumed so much energy during the day that by the time we wanted to go to that great playground in the Daan park, he had just fallen in a deep sleep in the stroller. This is how our sunny day in Taipei looked like:

We first went to the Martyr’s Shrine. It is dedicated to the fallen soldiers in the fights against Japanese invaders and the communists. We went in the morning so there were very few people and most of them seemed only interested in the changing of the guards (which was admittedly quite impressive). This allowed us to have the entire Shrine for ourselves, wander around in quiet and peace and learn more about the history of this place. Our son loved the changing of the guards and followed them all the way to the gate.

Next stop was the Confucius Temple. This was a particularly interesting temple as it is both a place of prayer and a museum. Besides its impressive architecture it also has a fairly extensive educative component. From the entrance you are provided with a map indicating the walking tour, there are many displays and explanations and what makes it even more interesting is the 4D explanation movie (English subtitles) of Confucianism in the form of cartoons. They told us that the movie is suitable for a 3 years old but there was a scene with a dragon where he got quite scared (I definitely don’t recommend this movie for under the age of 3). You can also get a free calligraphy blessing card.

Across the street from the Confucius temple is the Baoan Temple. This is just incredibly impressive and the fact that we got there during the prayer made the experience heavenly.

We then took the metro to the Daan park where we heard there is a really nice playground. However, our son fell into a deep sleep so we continued with the metro until the end of the line to the Taipei Zoo. From there we took the gondola to the top hoping to see a beautiful panorama of the city. In hindsight this was not the best decision since by the time we got up there it was almost dark and we hardly saw anything. Besides the fact that we were all very cold, hungry and moody there was a huge queue to go down. However on the way up, it seemed like a great plan. For some reason there was also a massive queue going up, which we could skip entirely because we did not care much for the so-called Crystal Cabins where the floor is made of glass. We did enjoy spectacular panoramas on the journey up. So much that the fact that the destination was not what we had hoped it to be did not matter anymore. The cliche is really true that its not about the destination but about the journey. This day was just to amazing to end perfect!