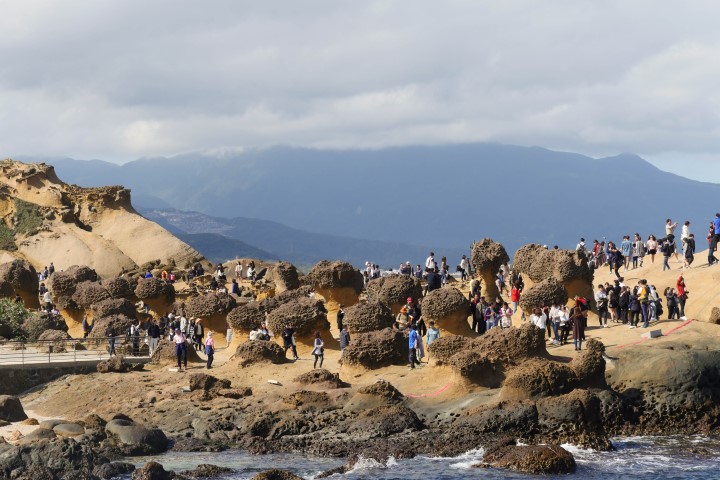 On the third day in Taipei we took a long daytrip to the Yehliu Geopark (about an hour drive from Taipei), Jiufen and Shifen. You can do this trip either by public transport or by hiring a driver. We thought that with a 3-year-old it would be easier to hire a driver. We were extremely lucky with our driver who spoke English very well and we had many insightful discussions with him about Taiwan. A full day in his car and we came back with a considerable baggage of information and so many nice ideas.

He picked us up at the hotel and we first drove to the Yehliu Geopark. When we arrived, there were few people, but by the time we left there were huge queues to enter the site (they only allow a maximum number of people). The Yehliu Geopark is home to a number of rock formations with different shapes. They mostly look like huge mushrooms. Some rocks were even given names based on their shapes. It was a great feeling that we could just walk among these formations and observe them close by. Nature’s carving at its finest.  Our son had a lot of fun (not so much the parents:) hiding himself and our belongings behind the formations. It is definitely an impressive site to visit, but you should be aware of the crowds. Also, there is a good street market at the exit of the park.

We then continued our drive to Jiufen (another 30 minutes).

This small village was one of my favorite places I have visited in Taiwan. Among others, this town is known for inspiring Miyazaki’s greatest film: Spirited Away. Its location is just breath-taking, on a cliff, overlooking forests stretching out into the ocean. At any moment of the day this place is just extremely crowded, but that did not seem to diminish its charm. We were wandering up and down hill, driven by the mix of smells, trying all sorts of bites (this is another street food paradise). You will also find many charming tea houses and art shops. We stopped at a random ceramic shop without knowing that on the first floor they had a space turned into a tea room, very homey and cosy with the most astonishing view over village and surroundings. It kind of felt surreal to leave the crowded Old Street and end up by accident in the most serene setting possible with just the 3 of us. We had a special sort of oolong tea which was served from handmade pottery. This moment will surely remain of emotional value to me.

After Jiufen we went to the Shifen waterfalls, which we managed to visit right before closing time (around 4 pm). Again, we avoided the crowd and enjoyed the magnificent view. There is also a stroller route, however, to get closer to the waterfall you need to climb quite a few stairs.

It was already dark when we got to the Shifen train stations. This is an extremely colourful and crowded place where people write and draw wishes on lanterns and set them off into the sky. This happens literally on the trains tracks. You will see every now and then someone warning that the train is approaching. We also picked a colourful lantern (you can choose from different colours which have various meanings). Our son drew enthusiastically and gathered a group of supporters around him.