New Zealand with a Toddler-Christchurch to Dunedin via Moeraki Boulders 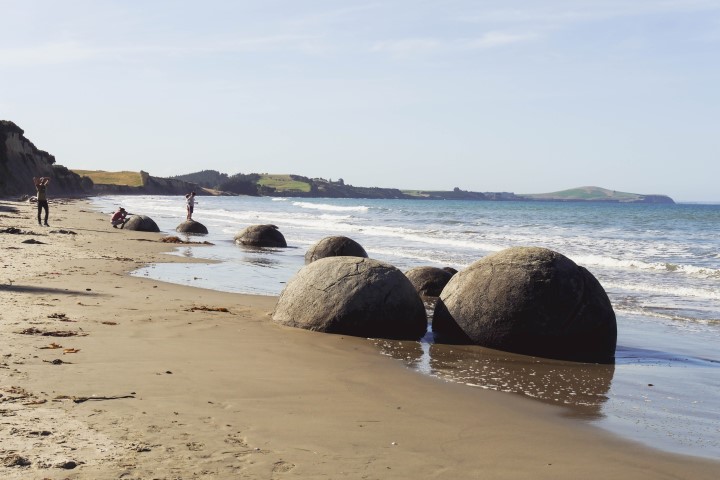 Late in the night, on our last day in Sydney we took a flight (3 hours) to Christchurch, New Zealand. Our little explorer slept again almost the entire flight, which meant that our chances of going to bed once we got to the hotel were minimal.

The wonderful story of two half asleep adults, a bunch of suitcases and a toddler arriving at midnight.

Toddlers and suitcases on wheels almost always equal love at first sight, which in our case meant that he strongly insisted to carry one of the small suitcases on wheels, constantly falling over it and getting up with a serious and determined face to continue. Especially so when the walkway was slightly descending. To much delight of everyone passing us by. By the time we got to the security checks we were by far the last ones from our plane, and I wouldn’t be surprised if all passenger of another plane also overtook us. They still made us take out our hiking shoes from the luggage in order to scan them.

We knew that we would arrive at midnight, so we booked a Juicy Snooze (the same company that rents the very colourful caravans) hotel room near the airport. Getting to the hotel should have been a 5 minute walk, but turned into a small adventure. We had asked for directions in the terminal, but a combination of the bad indications and our poor sense of direction in the middle of the night led to us taking the wrong path, so we decided to try plan B, which was to follow the main road. Once we got to the pedestrian walkway, the sprinklers were fully on to water the grass, so we couldn’t really go that way. With three large suitcases, three small suitcases, a stroller and our little explorer we were unsuccessfully trying to dodge most sprinklers by right timing and sometimes taking the road. It seemed like quite a surreal moment. After coming through the sprinklers mostly wet, we had several other obstacles to overcome. By the time we finally arrived at the hotel, it felt like we had completed some weird obstacle course. We even managed to wake up one of our neighbors who came out angrily complaining about the noise. Of course, the next day in the morning, it looked very different and we were wondering why it had taken us so much time in the night. Yes, we  finally made it to New Zealand!

The next day, we grabbed some breakfast and groceries from the supermarket nearby and went to pick up the rental car. At the moment all I can tell you is stay away from Europcar. I will get back at the some point with details but in a nutshell they charged us twice for the same service and 2 months after our trip we are still disputing this issue. We never had any problems with a rental company before.  The car rental itself went fine. It’s just once you get in touch with customer service that they’re an absolute nightmare to deal with.

We started exploring the Southern Island of New Zealand by driving towards Dunedin via the Moeraki Boulders.

The first random stop on the way to Dunedin happened to be in one of the most beautiful towns in New Zealand. In comparison with other towns that have very similar simple architecture, in Oamaru you can find a true bohemian atmosphere given by well-preserved heritage, elegant buildings, many hip venues, art shops, steam trains, even a steampunk playground. Oamaru is also a well-known attraction due to the colony of the smallest penguins in the world (Blue Penguin Colony). Even though we did not manage to see this, we are really happy to have spontaneously stopped here for a bit. I would recommend spending the night here.

…and the stunning Moeraki Boulders

We then continued to the Mouraki Boulders, this wonder of perfectly spherical boulders located on the Koekohe Beach. According to a Maori legend these boulders are eel baskets from an enormous sunken canoe. The scientific explanation places the formation of these boulders 60 million years ago, a process due to ancient sea sediments. Almost each boulder is two-three metres high and weighs several tonnes. They are very unusual and truly amazing. We had a relaxing walk on the beach, late in the afternoon, the sun was still warm and the light falling on the boulders was just incredible.

We finished our long day at a lovely Bed and Breakfast in Dunedin.