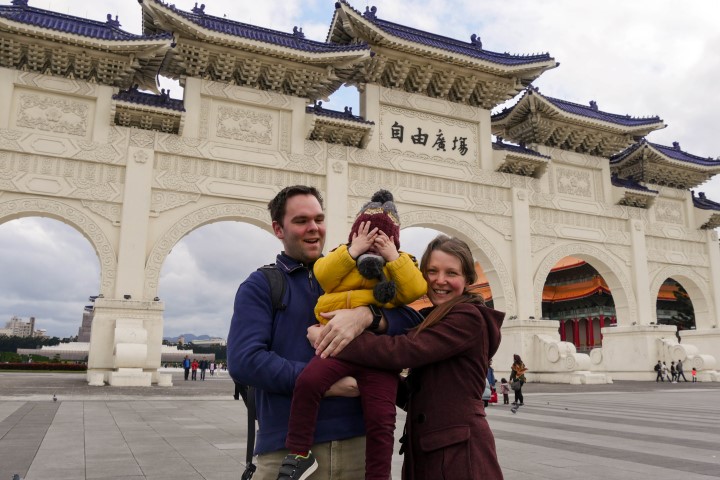 It’s been now almost a month since we returned from our spontaneous two weeks in Taiwan. By spontaneous I mean that the entire trip was planned only 6 days prior to departure. We actually took a lot of time planning a trip to Thailand, which we dropped last minute.  A great deal with KLM airlines (direct flight Amsterdam-Taipei with perfect toddler-friendly flying hours) and a few convincing stories about Taiwan made us change our plan. Knowing that January is outside the holiday season and that this is also the driest month of the year in Taiwan with pleasant temperatures were additional arguments for this choice. Unlike other trips which we plan carefully, this time we did not really know what we were getting into. Embracing the unknown of this far away destination, we took a night flight to Taipei.

As mentioned in previous posts, now that we only travel with our son, for long flights we always opt for night flights. Once again, our son slept undisturbed for about 9 out of 12 hours and the remaining time went just fine (colouring books, stickers, some toys and Mickey Mouse). He loves the plane, traveling by plane. In fact, he was asked by Santa what things he likes the most, and one of his top choices was sleeping in an airplane. The taller you grow the less enjoyable it becomes (ask my 2m tall husband) 🙂

TIP!! A tip once you arrive at the airport in Taipei, just before the passports check, you can rent a mobile WiFi hotspot which provides all your devices with unlimited internet (as long as you keep it charged). We were not planning to use it so much but it came in really handy when we rented a car and they only had a Chinese GPS. And also to use for navigating while walking, for instantaneously translating Chinese menus to English (using Google Translate), and for communicating with locals via an instant translation App( in case they did not speak English which was very often the case) .

TIP!! We traveled with 3 suitcases (why?:)) and a stroller and knew this would not fit with a regular taxi. For safety reasons, we also always prefer to have a child seat in the taxi where possible. This could easily be booked and prepaid with the AirPoPo app.

We spent three nights in Taipei and this is what we loved the most:

Shilin Market is also one of the most popular night markets. We heard lots of good stories about the street food in Taiwan and were looking forward to try it. This market is a mix of every scent, colour and sound you can image. From kids and adults fishing and frying the fish on the spot, to games of skill and other local games, clothes, souvenirs, electronics, food (local specialities). We tried a delicious omelette/pancake with veggies, sweet potato balls, sugar cane juice, bubble tea, corn. In general, I am quite reluctant to eat from the street but from what I understood there are very strict requirements for Taiwanese to become street chefs and there are frequent quality controls. We ate street food almost every day and none of us got sick. Taiwanese street food is just delicious. Another local specialty is the stinky tofu which really deserves its name. I was hoping to find the courage one of the to try it, but the smell was just way out there :). The Shilin market also has a food court in the basement, but we preferred the food on the streets around the market. The food court was probably all right and authentic, but the salesmen were very ‘in your face’ pushing their meal options, which put us off somewhat. The Shilin night market was worth visiting, but the next ones we saw were better.

The view on Taipei from Taipei 101 and the world’s fastest elevator!

The next days started quite late but we all slept the whole night. No significant jetlag! At the hotel we were warned that irrespective of the time of day, the Taipei 101 is always very crowded, especially in the weekend. We were therefore already making plans to skip this, but decided to give it a try. We waited only about 5 minutes late Saturday morning :)! This seems to be very unusual. Taipei 101 (landmark of the Taipei city) used to be the tallest building in the world until the Burj Kalifa was built. The observatory deck is on the 88th, 89th (indoor) and 90th outdoor level. It also has the world’s fastest elevator according to the Guinness Book of World Records. The viewing deck is large, so our toddler burned a lot of energy by running around and counting the cars and buses from above. The view (especially from the outside observatory deck) is stunning!

We approached this square through a white ceremonial gateway of an overwhelming scale. The square is immense and the view from the Main Hall on the gardens, the historical buildings and the gate are just astonishing! The sound of the drums and trumpets of practicing school kids provided an incredible vibe to this place. Needless to say, our toddler enjoyed the immensity of the place and run all over. He loved feeding the pigeons together with a Taiwanese girl.

The prayer at the Longshan Temple

We arrived there during a prayer. The Temple was full people burning incenses which created an amazing haze with an unforgettable scent. This old temple (build in 1738) is located right in the middle of a modern area and the contrast between the architecture of the place and the surroundings its just weirdly interesting.  Despite being a well-known tourist attraction (we haven’t seen any tourists besides us) it felt very spiritual.

The random walks on the streets of Taipei that kind of felt like a treasure hunt.

The Modern Toilet Restaurant with its funny concept where we had a good laugh and a relatively good meal.

From Taroko Gorge to Kenting (Taiwan)