A Day in Smoggy Hong-Kong 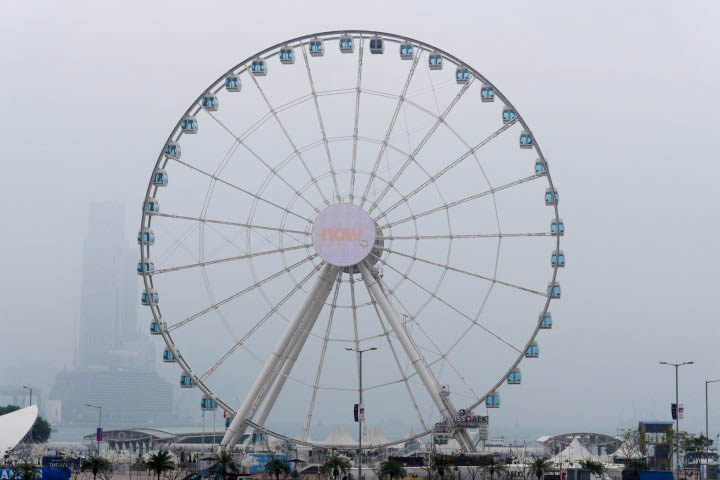 We took a night flight from Auckland  to Hong Kong. Hong Kong was the last stop of our trip. The reason for this stopover was to split the trip from New Zealand to the Netherlands in two and make it easier to all of us. Besides, none of us has seen Hong- Kong.

With Air New Zealand you can book a sleeping couch in the economy class, which basically means the footrests go all the way up and you get a mattress. This worked somewhat well for me and our son, allowing us some sleep, while my husband had some quiet time sitting upright and being used as a pillow 😊. We arrived early in the morning in Hong Kong and checked in to the Harbour Grand Kowloon hotel, where we were happy to find that our room was already available early in the morning.

The location of this hotel is just amazing. It overlooks the Hong Kong skyline, most us which was unfortunately taken up by smog that day. I was prepared for some smog, but the density of the smog and poor quality of the air really struck me. It felt like everything around was blurred, covered in a haze of smog. Besides this, we still managed to enjoy ourselves and here is what we’ve done:

-A few minutes ride on the Peak Tram (the world’s steepest funicular railway) you get to the Victoria Peak. The view here it was supposed to be breathtaking. Well, we’ve only seen a cloud and the closest skyscrapers. The tram ride was fun and the missing view kind of interesting.

-On a high pollution day, the parks are a blessing. Hong Kong has some really beautiful parks with lots of playgrounds.

-Took the ferry from one side of the city to the other (from Central to Tsim Sha Tsui) and had this kind of the “flying Dutchman” view.

-Walked around the city

We had a fun day in Hong Kong. I would certainly go back but will definitely check the expected level of pollution in advance.

At the end of this trip, I can say once again that if you want to, it is certainly possible to travel with a 2 year old as far as you like. I felt that we stepped out from our daily routine and just went with the flow, parented between different time zones, became more flexible, grew even more together as a family,  discovered together, juggled well between a very good plan and many spontaneous changes (toddlers are a river of spontaneous actions), packed and unpacked more than a dozen times, carried way too much luggage (which we WON’T do next time), and overall just had a wonderful time!